In honor of Black History Month, we reached out to several prominent black leaders in the mortgage industry to celebrate their success, learn from their experience, and gain insight into the challenges facing the mortgage industry. Today we’re thrilled to share this interview with Antoine Thompson, National Executive Director of the National Association of Real Estate Brokers (NAREB).

Antoine shares how his position at NAREB has helped him work closely with the African American community while expanding NAREB’s footprint into other demographics as the organization works toward its mission of achieving democracy in housing.

There are people who may be unfamiliar with the National Association of Real Estate Brokers. Could you provide a brief history of the association and the role it has played in fighting for equal access to housing?

NAREB refers to its members as Realtists. Explain the origins of the term and give us some insight as to what it means to be a Realtist – both from a practical standpoint, and what it means in a broader sense to Realtists and the people they serve.

When NAREB was founded in 1947, Black real estate professionals were not allowed to be members of the National Association of Realtors (NAR), nor be called Realtors. Therefore, since the founding of NAREB, members of the association have been called Realtists. When you work with a Realtist, you’re working with a professional who not only meets the highest ethical and professional standards, but whose work builds upon our mission of achieving democracy in housing.

Although NAREB is closely associated with the African American community, do you see the association expanding its footprint with continuing shifts not only in the demographic makeup of the United States, but also in attitudes regarding race?

In 1947, the founders of NAREB made a commitment to ensure membership in the association was open to all persons. This is evidenced by some of the photos of the early NAREB conventions in which convention attendees and members represent a broad spectrum of America. Further, NAREB is one of the first fair housing organizations in the country. We have a special charge to make certain that communities of color are treated with dignity and respect, and when someone chooses to work with a Realtist, they are helping to fulfill that mission.

Moving on to more personal topics, give us a bit of background on where you grew up and the career path that lead to you joining NAREB?

I had a significant public service positions in my hometown of Buffalo, New York. When I was elected to the Buffalo Common Council, I authored Buffalo’s Fair Housing Law and secured over $75 million for community development projects. I was then elected to the New York State Senate in 2006 and 2008. During my time in the State Senate, I served as the first African American Senate Deputy Majority Whip, the first African American Chair of the Senate Standing Committee on Environmental Conversation, and Co-Chair of the Senate Minority and Woman Business Enterprise Task Force.

Looking back, who served as role models to you, and what did you learn from them?

One of my role models is Dr. Henry Taylor, director of the UB Center of Urban Studies, because of his strong commitment to urban policy and his advocacy for building civic capacity to effect community change. Another is R. Donahue Peebles, who inspires me because of his success in real estate and his understanding of the role of politics in development and building wealth.

Outside of work, what are your interests?  What brings you joy?

I enjoy volunteering with nonprofits that help the community. I also enjoy spending time writing on social, economic and political issues, as well as poetry. I’m also a runner, which goes back to my time in high school when I was captain of both the cross-country and track & field teams.

Final question:  Once we’re on the other side of the pandemic, what are you looking forward to the most?

I am looking forward to seeing more economic recovery for all Americans so that they can run their businesses, advance their careers or even re-enter the workforce and take care of their families. On a personal level, I’m recently engaged and am looking forward to getting married and being able to travel once again.

The opinions and insights expressed in this Q&A are solely those of its interviewee, Antoine Thompson, and do not necessarily represent the views of either Mortgage Guaranty Insurance Corporation or any of its parent, affiliates, or subsidiaries (collectively, “MGIC”). Neither MGIC nor any of its officers, directors, employees or agents makes any representations or warranties of any kind regarding the soundness, reliability, accuracy or completeness of any opinion, insight, recommendation, data, or other information contained in this blog, or its suitability for any intended purpose. 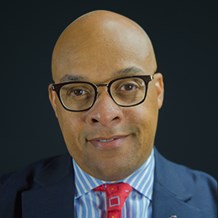 Antoine Maurice Thompson is a native of Buffalo, New York. A graduate of SUNY Brockport with a dual bachelors’ degree in History and African and Afro-American Studies, Thompson also studied at the University of Ghana in Ghana, West Africa. He is the recipient of an Honorary Doctorate of Laws Degree from Medaille College. Thompson began his career in public service as a Legislative Assistant for the Buffalo Common Council Central Staff. In January 2001, he was unanimously appointed to the Buffalo Common Council and served for 5 years before being elected to the New York State Senate in 2006, representing Buffalo and Niagara Falls for four years. In 2012, Thompson was appointed Executive Director of the Buffalo Employment & Training Center (BETC). In April 2015, he became the Executive Director of the National Association of Real Estate Brokers (NAREB), the largest organization of African American real estate professionals in the United States. Thompson has received various awards, which include the NYS Solar Industries Association Legislator of the Year, the NYS Environmental Advocates the Legislator of the Year Award, the WNY Climate Action Coalition Leadership Award, Buffalo Audubon Society Government Award for Leadership and Conservation, Citizen Action of New York- Progressive Leadership Award, the Black Chamber of Commerce Business Advocate Award and the Buffalo Branch NAACP – Medgar Evers Civil Rights Award. In 2021, he was ranked on the Swanepoel Power 200 as one of the Most Influential Leaders in the Real Estate Industry in the U.S. Antoine is a partner in Creative PMO Solutions. He is also a licensed real estate agent in New York State. Antoine is a member of First Baptist Church of Glenarden, fiancé of Tracey Webb and the father of Deja L. and Joseph A. Thompson.

We review all comments to ensure they align with our commenting policy, so there may be a short delay before your comment appears.