In honor of Black History Month, we reached out to several prominent black leaders in the mortgage industry to celebrate their success, learn from their experience, and gain insight into the challenges facing the mortgage industry today. Today we’re excited to share this interview with Secretary of Housing and Urban Development (HUD), Ben Carson.

Secretary Carson explains how his background in neurosurgery has translated to his position as Secretary of HUD, what experiences have stood out so far, and how he’s working with President Trump to improve housing in America through programs like the Opportunity Zone initiative.


Given your background as an accomplished neurosurgeon, it seems like becoming Secretary of Housing and Urban Development represents a significant career shift, moving from the world of healthcare to the world of housing. What was it about HUD’s mission that really appealed to you?

As a pediatric neurosurgeon, I spent so much time operating on babies, trying to give them a second chance at life. Only a few days later, after successfully operating on them, I was forced to send them back into their homes – often with horrible conditions such as lead, mold, rats, roaches, and violence. I didn’t want to send them back home into those conditions. As HUD Secretary, I now have an opportunity to do something about that, to impact their lives and help put people on the pathway to success.


What’s one thing you learned from your career as a neurosurgeon that has helped you succeed in your role as Secretary of HUD?

As a neurosurgeon, I would concentrate on getting the patient into the best shape that I could possibly get them into – that is a gratifying feeling. When I first became Secretary, I put together a “Prescription for HUD” so I could do the same for the America’s most vulnerable populations. The prescription has three tiers, including “Advancing Economic Opportunity.” As Secretary, it’s my priority to advance opportunities for low income families through homeownership, workforce training, educational advancement, and health and wellness programs and services so that they have the best chance to succeed on their own.

When I first came to the government, the most frustrating part was that there is a tremendous regulatory burden when it comes to priority issues at HUD, such as affordable housing. To build affordable housing, we have to deal with onerous zoning restrictions, density restrictions, height restrictions, parking restrictions…the list goes on and on. I understand some regulations are important and I am cognizant of those. However, many regulations have been on the books for years and impede our ability to get things done and to help people. Luckily, as a surgeon, I’m used to cutting things.


How has this experience changed you? Are there any experiences that stand out as being particularly poignant?

Being HUD Secretary has been the honor of a lifetime. I can’t thank President Trump enough for giving me the opportunity to serve my country. Since I took office, we have put a large emphasis on self-sufficiency and independence programs at HUD that maybe hadn’t been explored before. We measure success by the amount of people we help off of government assistance, not how many people we put into a government program.

For instance, I was moved to begin a new program at HUD after I was approached by a former foster youth. This individual brought a widespread issue to our attention – nearly 20,000 youth age out of foster care every year and many don’t have anywhere to go. HUD’s Foster Youth to Independence program was launched within months of us hearing about this issue. It works to offer housing vouchers to those young people aging out of foster care at risk of homelessness, and it’s something I’m incredibly proud of. The youth receiving this award are just beginning a new chapter in their life, the stability of a new and permanent home can play a large role in their journey to success and self-sustainability.

I grew up in poverty myself throughout my younger years living in Detroit. But I had my parents who worked day and night to put a roof over my head, made sure I was fed, and told me that my dreams were always achievable. I had stability, that is what this is all about. So, this program is very personal to me. A home provides stability; when you have stability it makes it easier to reach your goals. I want these kids to know that HUD has their back, we are rooting for them, and we hope to see them become doctors, active members of their community, and maybe even some day. . .a cabinet secretary.

Additionally, I have seen so many positive results coming from the Opportunity Zone initiative launched at HUD to encourage investment in low-income neighborhoods. Not only are businesses opening in these once-forgotten areas, but the residents are finding jobs, earning income, and changing their life paths. As Chair of the White House Opportunity and Revitalization Council, it’s been incredibly rewarding to see the real change that can happen when federal resources come together.


Now that you’ve had the role for almost three years, what’s one piece of advice you’d give yourself on your first day, knowing what you know now?

Don’t listen to the nonsense, focus on the mission of the agency and the people we are serving. It is so easy to get caught up in political folly these days with the media and the divisiveness some are trying to create. You can’t let that get to you, keep your eyes forward and focus on helping people and making this country a better place than when you found it.


When you think about housing in America, what’s working, and what do we need to improve upon?

Housing markets across the U.S. appear to have support given the continued growth in the overall economy. Yet, for many Americans, the supply of affordable housing has not kept pace with demand. Housing prices in many markets continue to increase faster than incomes, creating affordability challenges to renting and purchasing a home.

There’s an old saying, “Fix the roof when the sun is shining.” The sun is shining bright in America right now. Now is the time to get together and do something about these issues.

That’s why President Trump created the White House Council on Eliminating Regulatory Barriers to Affordable Housing, which I have the pleasure to chair. At the end of January, we launched the “Driving Affordable Housing Across America Bus Tour” to engage directly with communities across the country on ways to increase housing supply so more Americans can have access to affordable housing.


Homeownership rates for African-Americans are the lowest they’ve been since 1960. How can the country reverse this trend, and what initiatives are HUD currently undertaking to tackle this challenge?

One of the most valuable programs HUD administers is the Family Self Sufficiency Program, where part of the monthly rent goes into an escrow. Over the course of a few years, participants can save up enough of that escrow for a down payment on their own home.

We want the housing that we provide to be a bridge, rather than a destination. The Family Self Sufficiency program does just that, by providing temporary help to get people back on track in a self-sufficient and independent way.

Still, we have to think about this issue responsibly. If you put someone in a home they can’t afford, you’re not really doing them a favor – they’re going to lose the home, their credit, and their future possibilities.


What does the word “homeownership” mean to you?

Homeownership is the cornerstone of the American dream. It is one of the best ways to provide Americans with stability and economic mobility. Responsible homeownership is the number one builder of wealth for most American families. For example, the average net worth of a renter is $5,000 dollars, while the average net worth of a homeowner is $200,000 dollars. That’s a 40-fold difference.

The opinions and insights expressed in this Q&A are solely those of its interviewee, Secretary Ben Carson, and do not necessarily represent the views of either Mortgage Guaranty Insurance Corporation or any of its parent, affiliates, or subsidiaries (collectively, “MGIC”). Neither MGIC nor any of its officers, directors, employees or agents makes any representations or warranties of any kind regarding the soundness, reliability, accuracy or completeness of any opinion, insight, recommendation, data, or other information contained in this blog, or its suitability for any intended purpose. 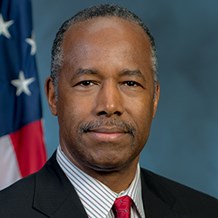 On March 2nd, 2017, Dr. Benjamin S. Carson, Sr., M.D., was sworn in as the 17th Secretary of the U.S. Department of Housing and Urban Development. For nearly 30 years, Secretary Carson served as Director of Pediatric Neurosurgery at the Johns Hopkins Children’s Center, a position he assumed when he was just 33 years old, becoming the youngest major division director in the hospital’s history. In 1987, he successfully performed the first separation of craniopagus twins conjoined at the back of the head. He also performed the first fully successful separation of type-2 vertical craniopagus twins in 1997 in South Africa. Dr. Carson received dozens of honors and awards in recognition of his achievements including the Presidential Medal of Freedom, the nation’s highest civilian honor. He is also a recipient of the Spingarn Medal, the highest honor bestowed by the National Association for the Advancement of Colored People (NAACP). Dr. Carson authored nine books, four of which he co-wrote with his wife Candy. The U.S. News Media Group and Harvard’s Center for Public Leadership named him among “America’s Best Leaders” in 2008. Dr. Carson and his wife co-founded the Carson Scholars Fund, which recognizes young people of all backgrounds for exceptional academic and humanitarian accomplishments. The Fund is currently operating in 50 states and the District of Columbia, and has recognized more than 7,300 scholars, awarded more than $7.3 million in scholarships, and installed more than 150 Ben Carson Reading Rooms around the country. Born in Detroit to a single mother with a 3rd grade education who worked multiple jobs to support their family, Secretary Carson was raised to love reading and education. He graduated from Yale University and earned his M.D. from the University of Michigan Medical School. He and his wife are the proud parents of three adult sons and three grandchildren.